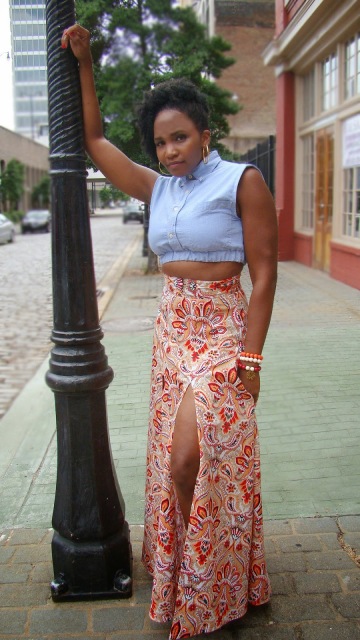 I hope you guys are beginning your week off wonderful. I am trying to be productive and not succumb to the Life Time Movie Network  🙂  I am so excited to tell you guys about this outfit !  The process in which this outfit came about is CRAZZY !!!!
First off I\’ve had the fabric used in this skirt for a while . I had purchased three yards of it because at time my plan was to do Palazzo pants …However!… the more I looked at the fabric the more I decided against it sooo I put it to the side and waited for the right time 🙂
Skirt
A few weeks ago I ran across picture of Kelly Rowland at the 2014 Billboard Music Awards 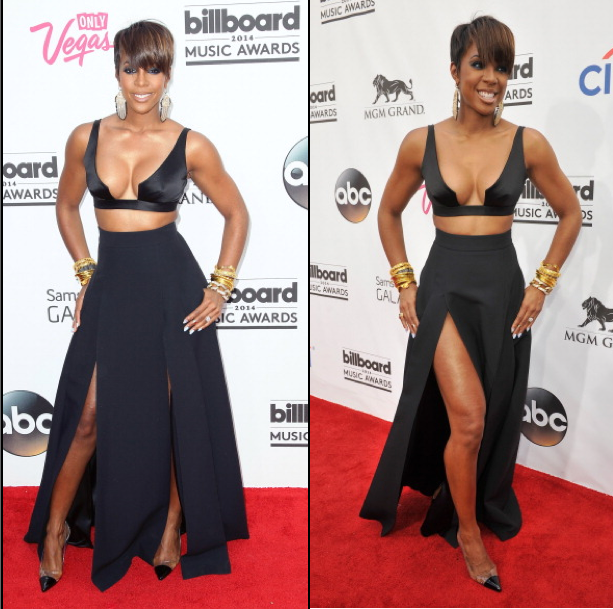 Now Kelly can rock anything an look good doing it but this skirt just took my breath away ..
SO!…. I decided try and reduplicate it ..
I knew that I would need a A line skirt pattern to get the slight fit at the top and flow at the bottom that this dress had…. I remembered having a old pattern in my stash of a A line skirt and decided to use it !!! 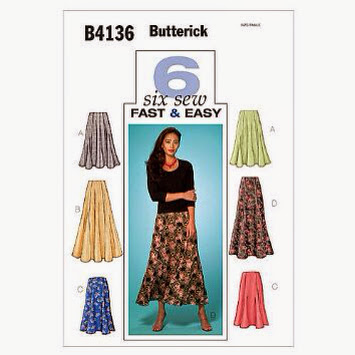 I\’ve had this pattern for a while so I decided to enter it in the Sewing Pattern Review.com \”Pattern Stash \” Contest.
I hope I do well 🙂
So, I had decided on the pattern but had no fabric ..I wanted a really BOLD look and doing it in a solid color just wasn\’t what I was thinking so I decided to use the paisley fabric that I had . I had three yards so it gave me the chance to really pay attention to how I cut the print so that the print didn\’t look altered when I put it together ( didn\’t want a repeat from the chevron/zigzag sitation!! )  .
There where three panels on the front and back so this was not easy at all!! 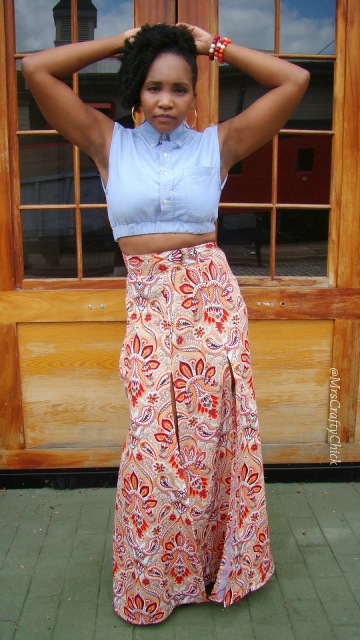 ….Anyway for the most part I think i matched things up …..
Now! to achieve the look I wanted I lengthen the skirt and only stitched the dress front seams down 17inches, I also added a 5 inch waist band to give the skirt the \”high waist\” affect that Kelly\’s skirt has. 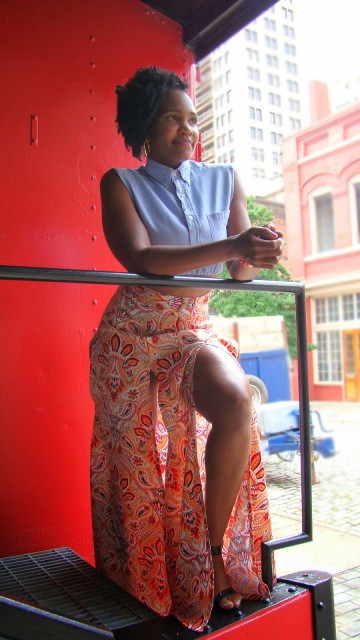 I changed the zipper pocket from the side to the back and added pockets. I think next time I\’ll move the pockets up a bit because they ended up slightly lower than I would have liked.
Oh! I also lined the skirt with Easy Knit fusible interfacing … I wanted a full look but I didn\’t want to add interfacing and lining because the dress would have been to heavy .. this stuff is GREAT , it feels like knit but is fusible so you get the interfacing and lining benefits in one !!! 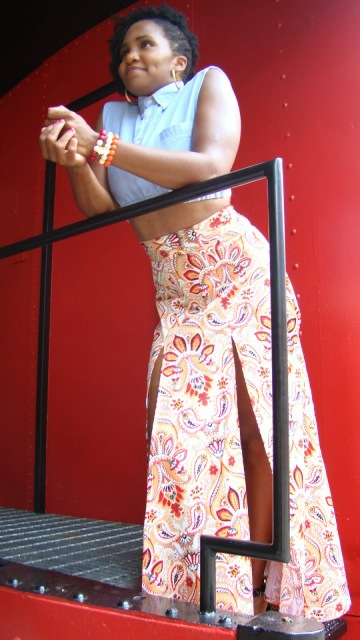 I love love love this skirt …
I think it came out fairly close to Kelly Rowland\’s…
I know i didn\’t use black or a solid color but I Soooo planned to !!
Top
This part is so exciting for me because this was my first time doing what I call a Re- Fashion !!!!
re·fash·ion (rēˈfaSHən) :
fashion (something) again or differently.
First things First !!

I had to get rid of those hot UGLY sleeves 🙂 I cut the sleeves away right before the seam line that was already created . 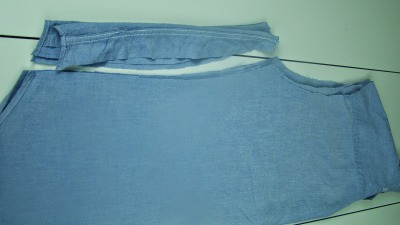 Next I laid the shirt flat and folded it with the sides touching … I smoothed the shirt out and made sure that all sides where even .. BEFORE I cut .. then I cut away the access fabric … from bottom of armhole all the way down the shirt

Next I pinned the shirt and  stitched it on a 5/8 inch seam ..
( when marking and cutting please take seam allowance into consideration ) 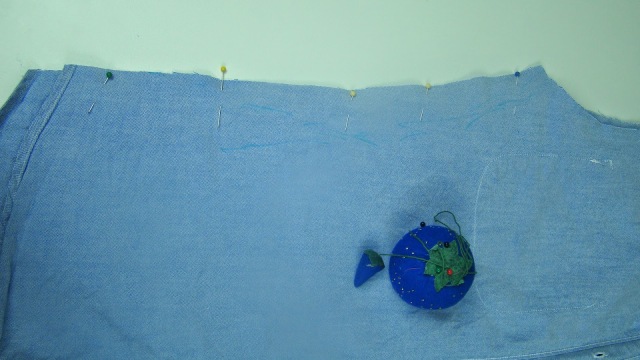 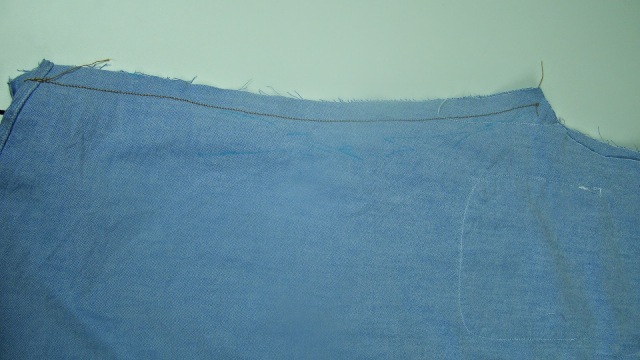 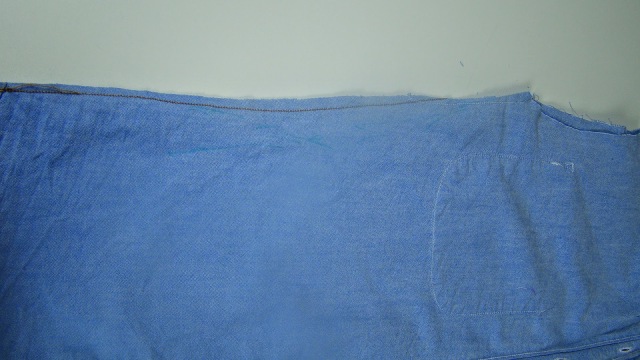 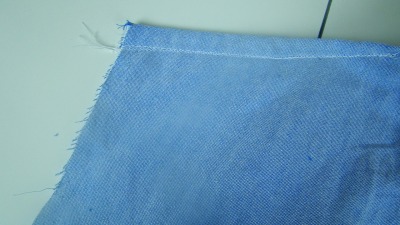 I tried the shirt on again and made some adjustment under the arms and on the shoulder seams for a slightly snugger fit 🙂
Adjusting the shoulder seem gave the shirt a more feminine look and less of a broad shoulder man look ! 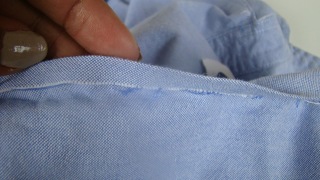 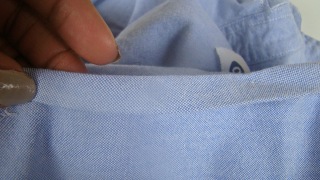 OK so I needed to do something with those cut sleeves … I decided to do a rolled him .. I folded it under 1/4 of a inch ..Pressed.. and then folded under again and pressed 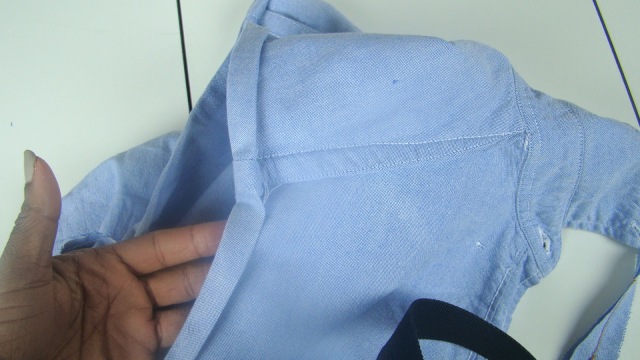 Once I finished pressing the hem down I ran a stitch along the edge of folded hem……. 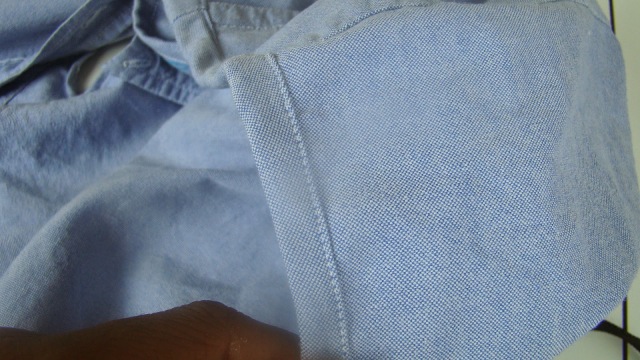 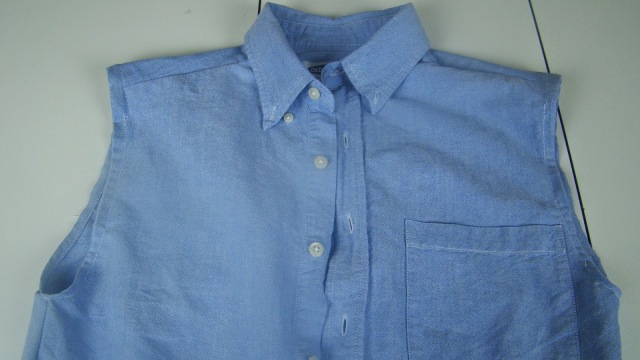 So now I need to work on the crop top .. I again tried the shirt on and marked where I wanted it to fall …
( Keep in mind at this point as to whether you want to add a bind at the bottom or leave it with a raw edge .. this will affect where you decided to cut )
I am binding mine at the bottom so I marked where I wanted it to fall PLUS the width of the binding 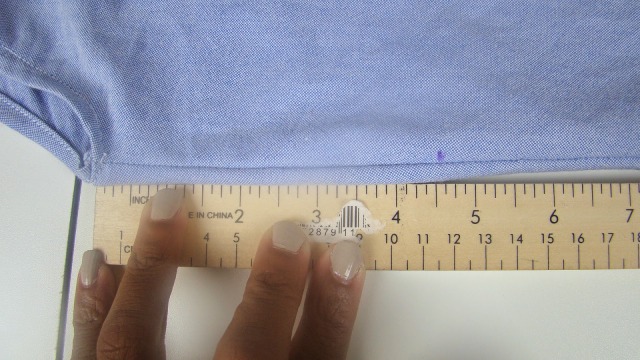 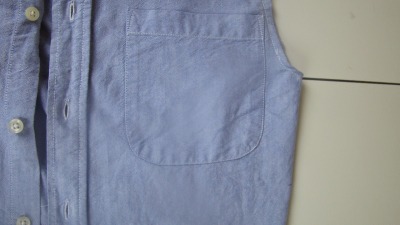 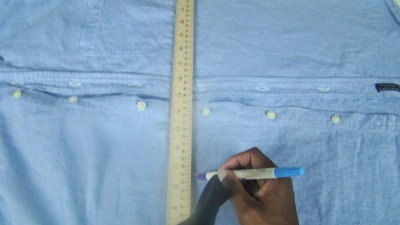 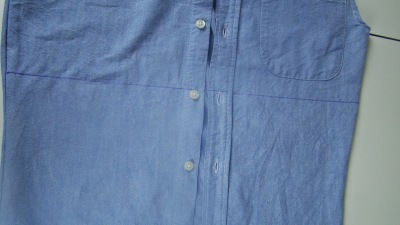 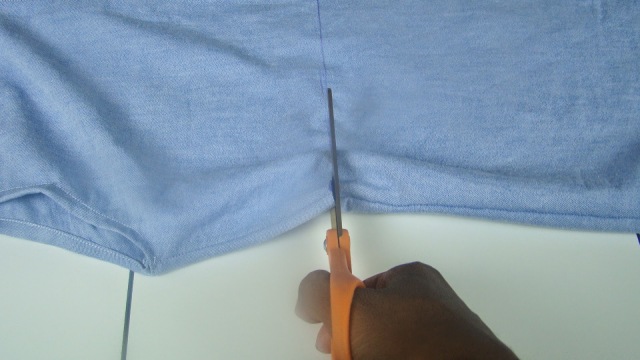 Here is the results when I cut it …
Now you can stop here, throw it in the washer, and fray it a bit at the ends if you want …
I wanted a more finished look so I decided to add elastic to the bottom of mine 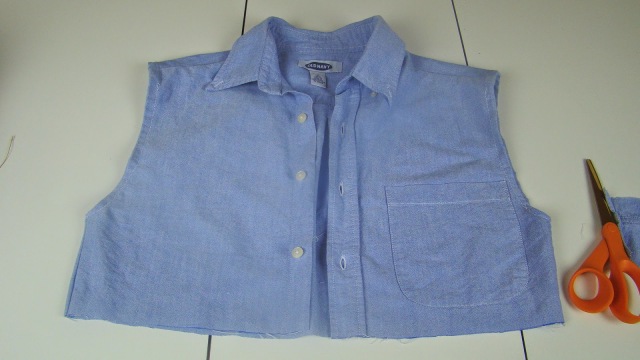 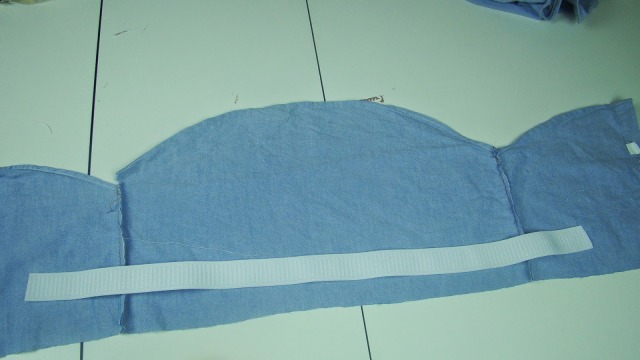 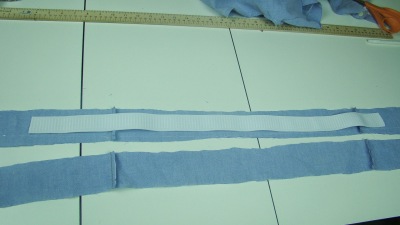 Next I pressed and top-stitched the two pieces so that they would fold easily ….
I lined the two raw edged up with the RIGHT side shirt ( right sides together ) and sewed … 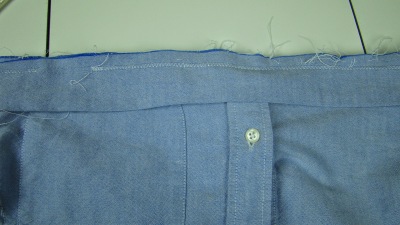 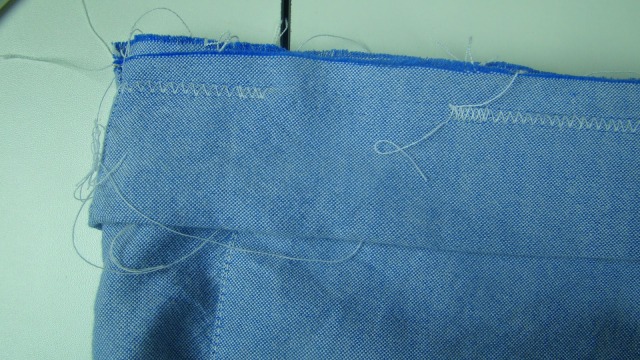 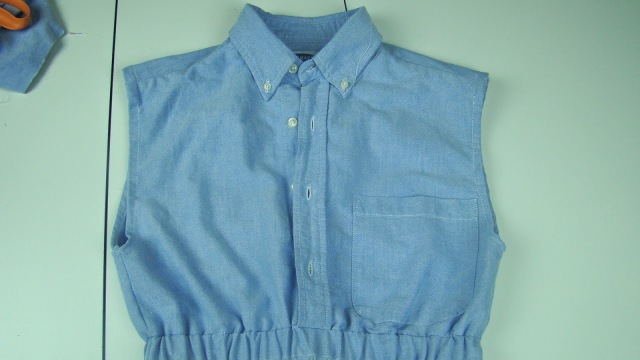 The shirt turned out BEAUTIFULLY …. !!
I am a Official Thrift Store LOVER!!!
I purchased two other pieces while I was there so I CANT wait to Re- Fashion them !!
I hope this tutorial helped … 🙂 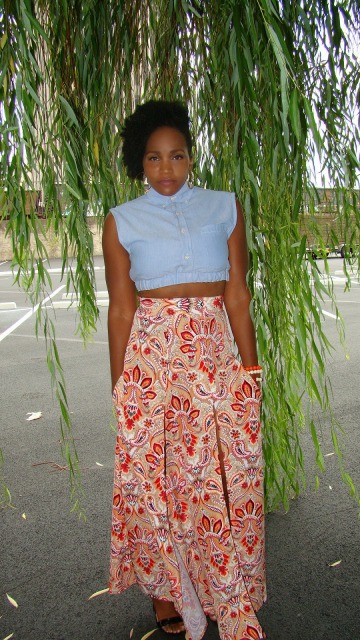 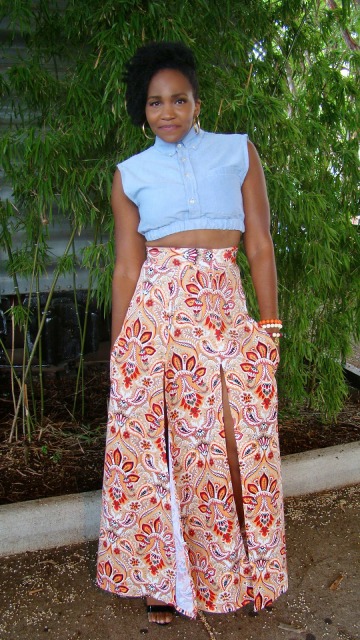 Until Next Time XOXOXO 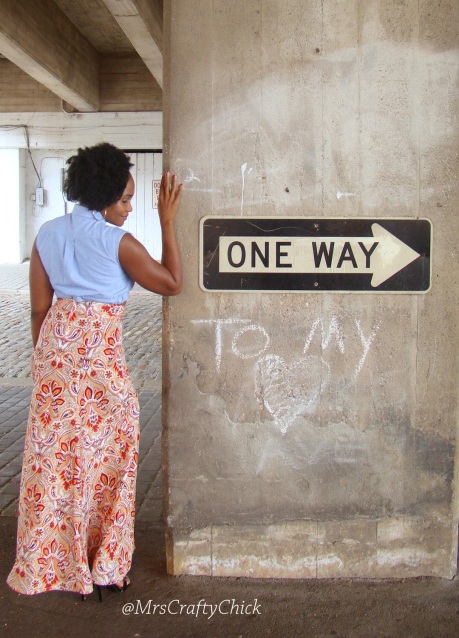